Syria is part of the Middle East with a total area of about 185 000 km. It lies to the East of the Mediterranean Sea, with 183 km of coastal borders, bounded by 32(d) 19(m) and 37(d) 20(m) N latitudes and 35(d) 43(m) and 42(d) 25(m) E longitudes. Hermon is the highest mountainous summit of the country, it elevates to 2814 m. Peaks above 2000 m are quite common in the Syrian eastern slopes of Anti-Lebanon mountain. The lowest part of the country lies at the foot of the Golan heights reaching minus 200 m at the Tiberian Lake of Syrian Golan heights. 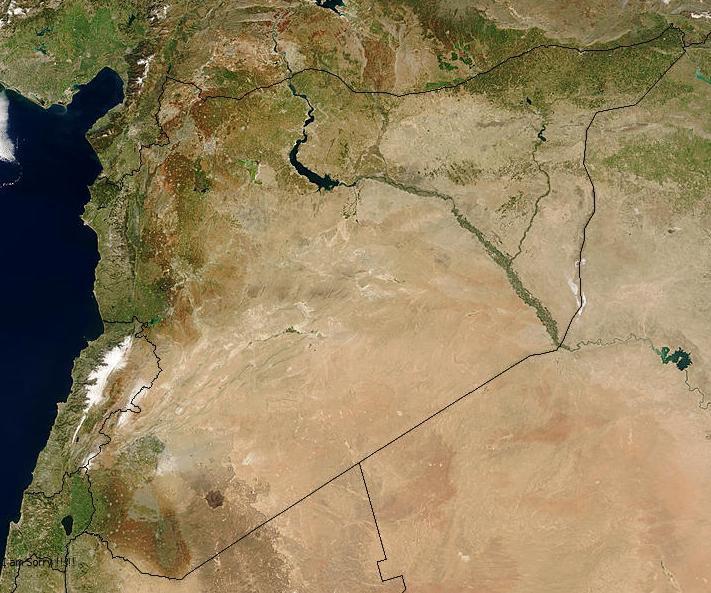 The climate of Syria is of the Mediterranean type, which is an extratropical climate with rainfall concentrated in the cool or relatively cold seasons of the year. Summer, the hottest season, is dry. The effect of latitude manifests itself by the abrupt north to south decrease of the annual amount of rainfalls. Hence, within a range of about five latitudinal degrees, the annual rainfall drops from about 1000 mm in the North and Northwest to less than 100 mm in the Southeast of the country.

Temperature is highly affected by the topography and the latitude of the different parts of the country. In general, temperature increases from North to South, where the mean annual temperature rises from just below 13d C in the N-NW to approximately 19d C in the S-SE of the country. Syria is a warm country, whereas the mean annual temperature does not fall below 11d C even on the mountain peaks. Air temperatures are affected by such factors as solar radiation, air masses, topography, and type of earth surface. Temperatures decrease with increasing elevation. With the exception of mountainous areas, the coastal area is milder in winter and cooler in summer than the rest of the country. The eastern and southeastern parts of Syria are warmest in winter while the eastern and northeastern parts are hottest in summer. January is the coldest month of the year; August is the hottest month in the summer. The continental influence causes greater difference temperatures between summer and winter in the interior of the country where temperatures below zero are frequent almost every year. The mean minimum temperatures of the coolest month (January) and the mean maximum temperatures of the warmest month (August) varies greatly from a region to another according to the proximity to the sea, altitude, exposition etc.., giving the Syrian climate its particularity.

The Potential Evapotranspiration calculated according to Blaney and Cridle formula varies from 1400 mm/year in the first stabilization zone. (1), to 2200 mm/year in the fourth (marginal) and fifth (the steppe) zone. Evaporation is around 1600 mm /year in the first stabilization zone. (2), 1800 mm/year in the second zone and 2000 mm/year in the third zone. These rates of evapotranspiration are relatively very high and should be taken into consideration in irrigation of agricultural crops It is important to highlight that, regardless of the quality and pattern of precipitation, and the variation in temperature, crops in all environments in Syria reach maturity at the end of the humid period and almost suffer drought stress in the post following phase of development. The challenge to managers of cropping systems is to devise strategies to minimize the impact of these weather - induced stresses and year - to - year variability on productivity. For this reason Research on agrosystems productivity should be oriented in that direction.

According to the pluviothermic quotient of Emberger Syria has the entire range of the Mediterranean climate from the super humid to the very arid (Table 3). The country had been subdivided into different bioclimatic ranges these are:

The value of the Emberger quotient (Q) is more than 100, i.e. the mean annual rainfall is at least 800 mm. The region comprises Lattakia, Tartous and partly Qunietera and Hama. This region includes two main stages of the vegetation type:

The Emberger quotient (Q) lies between 40 and 90. This region consists of the coastal plains and foothills of Lattakia, Tartous, Goulan heights and Qunietera, with mean annual rainfall that varies between 600 and 800 mm.

The main vegetation type is degraded oak steppe forest type, where the most dominated species are Quercus calliprinus, Q. ithaburensis and Pistacia palaestina.

The region consists of the plains and isolated mountainous formations lying within Aleppo, Idleb, Hama, Homs, Damascus, Al-Hasakeh and Swieda provinces which form a part of the Fertile Crescent. The vegetation is composed of grasses (Poaceae), with legumes (Fabaceae) and more or less tree species of Pistacia, Crataegus and Amygdalus with bushes of Quercus and Juniperus.

The values of (Q) lie approximately between 12 and 15 in the cool and warm varieties and the mean annual precipitation ranges between 200 and 350 mm.

The region consists of plains and low hills that called the marginal lands, bisected by the Euphrates River, the following provinces are included within this region, S. of El-Hasakeh, N. of Deir Ezzor, Raqqa, Aleppo, Idleb, Hama, Homs, Damascus and Daraa.

The vegetation of this region consists of grasses (Bromus, Aegilops, Hordeum, Vicia and Avena) with woody Astragalus species and shrubs of Salsola, Atriplex, Haloxylon and Artemisia.