J.J.H. de Labillardiere in 1791-1812 published five volumes of “Icones plantarum Syriae rariorum”. These constitute the results of his travels in the environs of Damascus, Lebanon, Anti-Lebanon and Cyprus.

A.Russell and P.Russell carried out extensive studies on the flora and vegetation of this town. G. A. Olivier and J.G. Bruguiere traveled in Egypt, Syria, Mesopotamia and Persia in 1796-1797. Their findings have been compiled in the “ Voyage dans l’Empire Othoman, l’Egypte et la Perse”. U.J. Seetzen journeyed in Trans-Jordan “Hauran to Moav and the Dead Sea”, the account of his travels was published in 1810 in two publications. J.L. Burckhardt is one of the eminent travelers in the area. For two years (1810-1812) he travelled in Syria, Lebanon and Palestine. Numerous botanical notes are included in his “Travels in Syria and the Holy Land 1822”. P. M. R. Aucher-Eloy travelled in Damascus in 1830 and in the northern part of Syria in 1835. His collections contain thousands of species from the Orient which have been published by others. T. Kotschy is among the most eager botanists of the Middle East. He travelled (1835-1860) in Northern Syria, Anti-Lebanon and the Syrian coast in addition to the majority of the Middle East countries and Arabia. P. E. Boissier in 1846 made his great journey in the Near East, through the Nile Valley to Assouan, then to Mt. Sinai and through Arabia Petraea to Gaza, Jerusalem and the Dead Sea, then went to Damascus, Lebanon, Anti-Lebanon, Antiochia, Aleppo and back to southern Lebanon. The results of these journeys were published in his monumental work (Flora Orientalis) in five volumes and a supplementary volume (1867-1888). This great flora has remained for long time the principal source of the knowledge on the Middle-Eastern floras. H. K. Haussknecht explored Syria, Armenia and S. E. Turkey in 1864-1866, the results of his work were  published in “Iter Syriaco-Armeniacum”.

The flora of Syria was intensively investigated at the end of the nineteenth and beginning of the twentieth centuries. C.I. Blanche and R.P. Vincent established large herbaria in Beirut, while G.E. Post (1838-1909) carried out extensive investigations in the area and set up a large herbarium conserved in the American College of Beirut. Post visited during his journeys most of the Middle East countries. His itinerary in Syria was through Mt. Hermon, Anti-Lebanon, Palmyra and Hauran. The accounts of his travels were published in (Flora of Syria, Palestine and Sinai 1883-1896), which was the first standard Flora for the region, since flora orientalis of Boissier. J.F.N. Bornmueller is one of the eminent explorers of the oriental flora. In 1892 he travelled (explored) the whole of the Near East up to Turkestan. His contributions to the knowledge of the Middle-Eastern flora were vast. One of his important works was the publication of the collections of H.C.Haussknecht and T.Strauss. A.Aaronsohn, a Palestinian botanist and agronomist, carried out his investigations in the years 1905-1915. He travelled in Palestine, Syria and Turkey and besides his taxonomical work and the discovery of the wild wheat, he also initiated the phytogeographical work in the area. His main diaries and collections have been edited by H.R.Oppenheimer(1930) and H.R.Oppenheimer and M.Evenari (1940), with many additions of their own. J.E.Dinsmore of the American Colony in Jerusalem was active in Palestine and Syria in the first half of the 20th century. He’d revised the edition of Post’s Flora (1932-1933) ,and included all relevant data published since 1896.

An important contribution to the knowledge of the Syro-Lebanese flora was published in 1930, which is the publication of the (Flore du Liban et de la Syrie) by Père L.Bouloumony, the second volume which contains photographs of herbarium specimens of most of the plants of these countries. R.Gombault has herbarised with J.Thiebaut in Jabal El Arab, the Syrian Desert and other parts of Syria and Lebanon during the period from 1930 to 1935. Thiebaut is the author of a large Flora in three volumes (Flore Libano-Syrienne) in 1936-1953, while Gombault was  publishing numerous valuable contributions to the flora of the two countries since 1932. G. Samuelsson went in 1932 and 1933 together with A. Hafstr and E.Wall to Palestine, Syria, Lebanon and southern Turkey. Most of his works were published after his death by K.H.Rechinger as “Reliquiae Samuelssoniane” in six volumes (1949-1959). Among others, Samuelsson also edited the collections made by the English ornithologist Colonel R.Meinertzhagen in Jebel Druz and the Syrian Desert, by M. Haradjian in Syria, Turkey and Cyperus in 1906-1913.

Père P.Mouterde, one of the eager botanists of Syria and Lebanon, has intensively herbarised all parts of these two countries and has published numerous contributions to their flora. Besides “La flore du Djebel Druz” in 1953, the three volumes of his Nouvelle Flore du Liban et de la Syrie“ have already appeared in 1966, 1970 and because of  the war in Lebanon, the third one in 1983.

In the last three decades of the 20th century, many studies have been carried out by Syrian botanists.

I. Nahal, one of the famous Syrian botanists, has performed many studies on the vegetation and plant ecology in Syria, which focused on the Eu-Mediterranean vegetation of the coastal Mountains, e.g. Pinus brutia, Quercus pseudocerris (Nahal 1962).  N.Chalaby’s  contribution to the  studies of the Syrian flora and vegetation started in  the1970’s. He focused on the forest formations in Syria (Chalabi, 1980, 1982). Y. Barkoudeh, a famous taxonomist in the Middle East, worked at ACSAD for about 15 years, herbarised in the Arab Central Herbarium of ACSAD and published ( in coopeartion  with Audat, M.) a book about  the vegetation of Syria (Barkoudeh & Audat, 1983). Also, there are many master theses concerning the vegetation of Syria that have been published in the Universities of Syria in the 1990s. Ghazal, A. (1994) studied the auto-ecology, taxonomy and phytosociology of Quercus aegilops L.

According to Mouterde's flora, the total number of the species in the flora of Syria amounts to about 3077, which belong to 133 families and 919 genera . Table (1 ) shows the largest families of the Syria's flora with the number of genera and species that belong to those families.

Zohary (1973) summarised the general features of the Syrian flora as follows:

*Lack of tropical plants, even in the warmer parts of the country.

*The presence of a fairly large number of forest trees that are found in their  southern limits.

*The presence of a considerable number of northern (Euxinian) species which might be regarded as relicts of a more humid vegetation.

*The presence of a sub-alpine tragacanthic flora in the higher mountain areas having close affinity to that of eastern Anatolia and Iran.

*The occurrence of a nival-alpine flora on the mountain peaks having affinity to that of the Euro-Siberian region.

*The presence of a considerable number of trees and shrubs growing in rather dry mountainous habitats.

*Syria comprises only a negligible number of Saharo-Arabian plants, but a very large number of Irano-Turanian plants centred mainly in the Syrian desert.

The phytogeographical subdivision of the flora

Due to its geographical position, Syria is inhabited by a flora of

heterogeneous phytogeographical character. The following plant geographical elements are represented in the flora of Syria:

Apart from these monoregional plant groups, together made the greater proportion of the flora. the Table bellow shows the phytogeographical distribution of the Syrian flora. Most of the species, which are indicated as Euro-Siberian elements in Syria, are confined to special habitats, which may penetrate into other Irano-Turanian, as well as into Mediterranean countries. A few of these species found scattered in the forest zone of Syria are of historic interest as probable relicts of the flora of the tertiary epoch. The number of bi- and multi- regional species in the flora of Syria, which are the plants species growing in two or more phytogeographic regions, is high.

The Endemism in the Syria’s flora

The total number of endemics is 243 species, which represent about 8.7% of the Syrian flora. Those species belong to 35 families and 113 genera. The table below points out the 15 families, which comprise the largest proportion of endemics. Out of the mentioned table, one can note that the ratio of endemism within the plant families is not harmonized with their presence in the flora of the country, on the genera side, they appear more homogenous.

The nti-Lebanon mountains were formed during the Triassic (Jahn 1994). These mountains form the border between Syria and Lebanon , the Western slopes in Lebanon and the eastern one in Syria . The highest peak of the Anti-Lebanon in the Syrian side rises up to 2800 m. a.s.l. The annual rainfall ranges between 400 -600 mm/year at the highest mountain peak. But it decreases in the northern part to 300mm as a mean value. This center is considered as a richest one of endemism in Syria . It comprises 41 endemic species. The following endemic species not found out of this center even in Syria : Gagea micrantha, Melica pannosae, Polygonum libani, Allium zebdanense, Agropyron libanoticum, Tulipa lownei, Tulipa aucheriana.

The mountainous chains of the Palmyrides are scattered in this center, and are situated in longitudinal parallel lines, They form embankments between mountain basins which take the form of open funnels. All the mountains of the Palmyrides are featured with low heights where they reach an average elevation of 500-600 m a.s.l. This center is well known by its limiting factors whether by moisture and heat, or by non-biological factors such as over-grazing. The most important species located in this center, and which are not found out of the center are: Ajuga rechingeri, Salsola autrani, Allium azaurenum, Salvia nazalena, Astragalus tadmorensis, Ankyropetalum coelesyriacum. 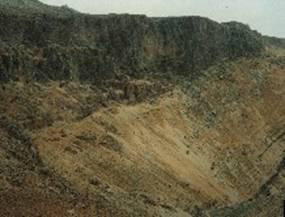 The topography of this center gives a natural appearance of the different volcanoes formations, where recent volcanic cones are located. The average height of these mountains is 1000 m a.s.l. The highest peak is 1800m. The topography differs widely by the successive Lava flows with different ages. The latest volcanic eruption happened in the Quaternary. Precipitation ranges in this center between 200 and 400 mm. It decreases towards the east near the Badiah (desert) while it increases with elevation above sea level towards the west. The winter is cold in general to very cold with snow accumulation for a long period at the mountaintop, while summer is hot and dry. The most characteristic endemic species of the center are: Salvia drusica, Polygonum cedrorum, Trifolium bonnevillei, Smyrniopsis syriaca.

The altitude of this hill ranges between 400-600m. It is surrounded by the northern Palmirydes Mountains from the east and by Al-Zaouiah mountain from the west, and by the Akrad mountain from the northwest which isolate the hill from Afrin - Idleb basin. Aleppo hill slopes gradually without distinct borders towards the Euphrates basin. This hill emerged during the Paleocene in the tertiary. It has a dry to semi dry climate; precipitation is between 200 to 400 mm/year . Some of the distinct species of this center are Astragalus dorcoceras, Tulipa aleppensis, Lamiun adoxifolium, and Vicia qatmensis. 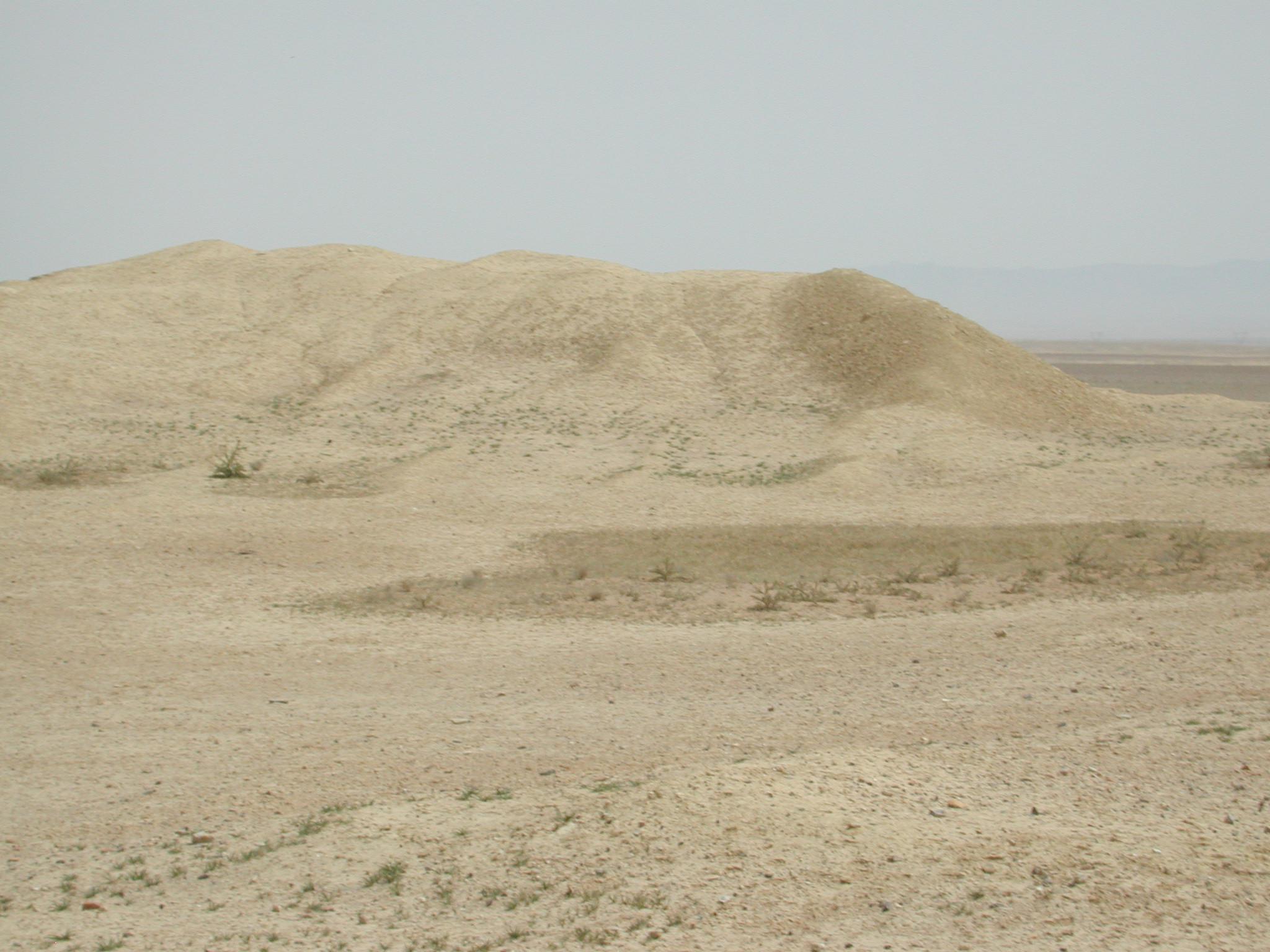 These mountains extend in the west of the country from the south towards the north, beginning from the borders with Lebanon up the turning point of the Orontes river towards the west. This chain is limited by the coastal plain from the west, and Al-Ghab rift valley isolating it from Al-Zaouiah mountain from the east. The average height is 1000 m and the highest peak is 1550 m. The coastal mountains emerged during the Mastrichian in the Jurassic . This area is characterized by a high precipitation exceeding 600mm/year and reaching in the high mountain 1500-1600 mm/year. The climate is Mediterranean with a humid and moderate to warm winter, with snow on the peak of Slenfe (1500m a.s.l). The species characterizing this center are Saponaria bargyliana,Urtica fragilis, Fritillaria alfredae and Cytisus Cassias. 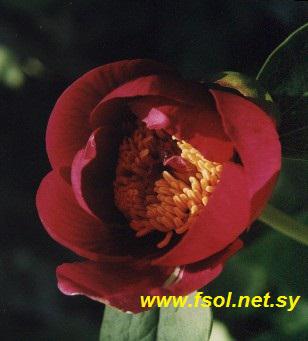 This center is located in a depression surrounded by different chains of mountains where we find on its southern limits the Anti-Lebanon and Qalamoun mountain, and from the northern the Coastal mountain, from the east the Palmyrides, and finally from the west the coastal chain. Homs city is situated in the middle of this center at a height of 505m a.s.l. It has a semi arid climate (precipitation: 413mm/year). The most characteristic species of thecenter are Anthemis samuelssonii , Lathyrus basalticus, Iris basaltica , Crocus itellinus . 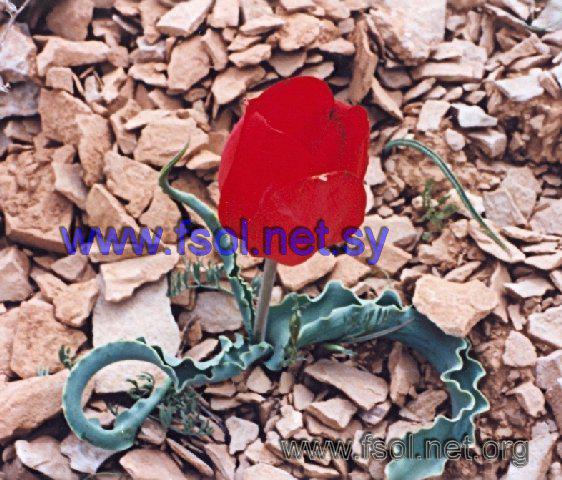